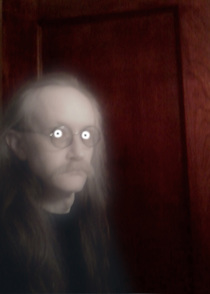 Dean A. Kendrick (1963 - ), an independent artist/animator, began his career at the age of 3, when his mother gave him a pencil and pad of paper to shut him up. He's been making noise with his art ever since. He grew up in suburban Chicago, saturated in a variety of musical styles and as much animation as was humanly possible in the pre-cable, pre-video and pre-home-computer world. He worshiped The Wonderful World of Disney and the Warner Bros. Looney Tunes whilst simultaneously developing an acutely sensitive bullshit detector, social conscience, and macabre sense of humor, fueled in part by the hypocrisy and smug self-satisfaction he found in his wealthy but emotionally bankrupt environment.

Finding a cohort of like-minded misfits (who later morphed into The Irritants, Dean’s studio band), Dean spent his teens immersed in theater and art, both in and out of school. By the age of 13, he had hit upon the method of getting out of assigned papers by instead making movies on a borrowed 8 mm camera. By high school, he and a friend were selling their animation efforts to Chicago public television. His other passion was community theater, where he designed everything from sets, theatre programs and posters, T-shirts and flyers, as well as acting and singing his ass off. An animation junkie, during a long-term gig painting original displays for a video rental store (remember them?), he discovered European, Canadian and Russian animation that broke Disney's rules of theme as well as introducing animation techniques other than traditional two-dimensional character animation or stop motion puppets. On fire, but still loyal to Disney, Dean applied to the Disney training school California Institute of the Arts after graduating from Lake Forest High School in 1981. When acceptance wasn't forthcoming, he enrolled in Carroll College, outside of Milwaukee, to study life drawing, graphic design, and theater. Before the second semester was up the art professors confessed he was teaching them more than they were teaching him, and Dean made the decision to strike out on his own.

Dean cut his teeth on Left to Write, a handcrafted fantasy adventure feature done predominantly with stop motion clay characters. His friends brought their talents to his aid, and The Irritants were born to provide the soundtrack. The Irritants music, while collaborative, displays Dean’s penetrating wit, existential fury, and his tremendous vocal range. The studio band developed a life of its own, and to date seven Irritants albums have been produced, to the joy of its magnificently cracked cult followers. Naturally, this lead to The Irritants Eye Wax, 25 minutes of music videos, containing live-action and a sequence of experiments with different animation techniques.

This was followed by the shorts The Thirteenth Bat, a traditional two-dimensional hand drawn cel project, and Numbering Bad Fruit, an unscripted stream of consciousness project concerned with his confusion over his sexual orientation, which won awards and recognition, including the commission of Queer and Loathing interstitials for a PBS series about people living with the HIV virus. Next was a dazzling piece of mystery, Don't Forget to Bring Your Eyes, and Weed the People, an artistically dizzying four minute treatise on equal rights in America. Even after moving to the computer, Dean remains devoted to traditional hand-drawn animation: no images are generated other than through his hands.

Dean is both animator and fine artist, each aspect informing the other. Edward Gorey, Grandville, the French Impressionists, the silky, sensuous swirls of Mucha - the political ranting energy of James Ensor - create a rich soup of loves Dean seasons liberally with his salty, sharp humor. The influences of Victorian art, illustration and advertisement enliven all his work, those flickering to life within the eye as well as those captured and pinned, unmoving, to the wall. His series 19th Century Fish People Portraits, the shadow boxes of Inaccessible Rooms, the surreal Racing Obsolescence, all invoke sepia photographs or film stills rescued from a truck found in the dripping eave of an attic. The attic of a strange house owned, perhaps, by a mad uncle with ties to alternate realities.

Experimenting endlessly with different mediums, Dean has been known to create jaw-dropping portraits with cigarette butts as his brushes and grocery store food coloring and cigarette ash as his paint. Coffee stains invoke age and hard use in his recent works, whether in pen and ink, watercolor, or gouache.

Passionately driven, Dean strives to create art that provokes the viewer into examining the roots of one's own perspective, hoping this will in turn - no pressure, now - benefit society, which certainly needs all the love, understanding and ass-kicking it can get.

"theirritants.com" and "Dean's Images d'Impertinence" © 2021 Dean A. Kendrick. All rights reserved. "The Irritants" is a registered trademark.